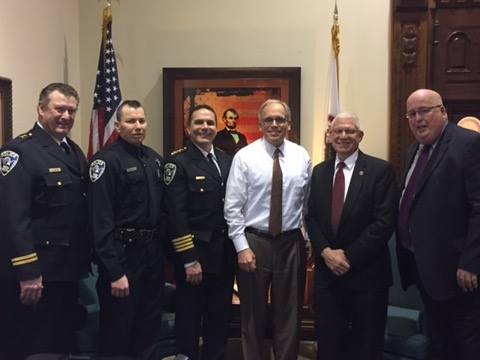 • Governments first and most important role to protect their citizens. By every measure the ruling democratic party and governor have failed at this priority
• Strongly backs the Blue
• Opposed the “defund police” measures passed and signed into law by Gov Pritzker
• Proudly supported by Fraternal Order of Police and Sheriff’s Assoc.

This year, the Democratic Majority passed some of the most dangerous legislation I have seen in my career of public service. These out-of-touch Chicago politicians continue to blame, harass, and prevent our law enforcement officers from being able to protect us, our communities or themselves from violent criminals. Crime in Illinois is out of control, and instead of strengthening laws to keep criminals behind bars, laws are being passed to restrict police officers from doing their jobs to protect Illinoisans’ families and property.

I have and will continue to vote to support our law enforcement officers. From helping them receive vital funding to voting against what I call the Democrats’ Criminal Leniency Bill, House Bill 3653, I will continue to stand up for those who are standing up for our communities.